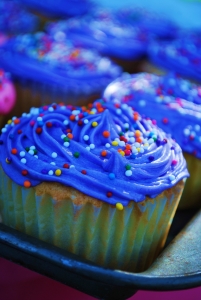 I learned a new word last night in my dream – complicake.  So far, we’ve concocted two meanings for it.

This is the meaning it had in the dream.  Someone was saying something was complicated, but instead they said, “Complicake.”  I was confused and repeated it to them, but that’s what they meant.  In hypnosis, one way to help someone become more relaxed is called a confusion method.  You say something that’s a little off or abnormal, and their conscious mind focuses on it while they become more relaxed.  In the same way, this could be used in a conversation with someone (or yourself) who is sounding like a broken record.  Sometimes we get on trains of thought that go around and around, aren’t helpful, and don’t get us anywhere.  If you throw in a word like complicake, it throws them for a loop.  They are distracted from their broken record and now have an opportunity to think new thoughts.

Another meaning we came up with is when something is at first complicated or feels difficult, but after you do it initially, it makes everything else a piece of cake.  Mark used this example with me making my first newsletter (yea!).  It took hours and hours to design!  I am someone who likes things to be done quickly, so at first, when it seemed like it was long and complicated, and I thought I would be doing this every two weeks, I was not a happy camper.  Then, Mark reminded me that I was making a template that could be used for all the other newsletters, so even though it took a while initially, it would make all the other newsletters easy to produce.  It’s complicake!

Remembering and Interpreting Your Dreams
Free Reading: Message from Loved One Who Has Passed
Free Reading! What is your spirit hoping for?