Have you ever had what you thought was a really good plan and set it in motion, only to have it thwarted by the Universe? It just happened to me! Grab a drink and lemme tell ya the crazy story about my passport…

Two weeks before we left Texas to embark on our adventure, Mark and I got the paperwork together to apply for a passport with my new married name. We paid for expedited processing and overnight shipping and sent it off, thinking it would arrive in two weeks. Two weeks later, the day after we left for Florida with our kitty cat Cosmo, we received a letter from the state department saying they couldn’t process my application until they received a certified copy of my marriage certificate. I knew this must be a joke, because Mark and I rushed around before leaving for Florida to get a certified copy of our marriage certificate, and we sent it with my application. I recognized this immediately for what it was: a stalling tactic from the Universe. Obviously there was more for me to do here in the U.S. before going abroad. I could see one of my Guides smiling at me when I heard the news, so that was just another indication that the Universe was being humorous.

I called the state department to let them know they already had my marriage certificate. The person I spoke with worked in a different office than the one with my documents, but she made a note and put in a request for someone from the passport office to call me. A week passed without receiving a call, so I called again. The lady said, “I see a request was put in for them to call you, but that doesn’t guarantee a call. They did acknowledge the request though.” I imagined them getting the request in the passport office, laughing, clicking ‘Acknowledge’, and getting back to their office party. The lady suggested I write them a letter, so I did.

Anytime I went to complain in my head or to others about how absurd this whole process was, I could see a Guide behind my shoulder, and he sent me the message, “This is a gift.” Despite the crazy appearances, I knew this passport mix-up was for my highest good, so I just rolled my eyes and assumed they would figure it out at some point.

In the meantime, we heard that Mark’s Great-Aunt Libby needed to move into a different home at the retirement facility due to health reasons, and she wasn’t going to be able to do it on her own. A few days later, Mark, Muvie, and I hopped into the car and drove to North Carolina. 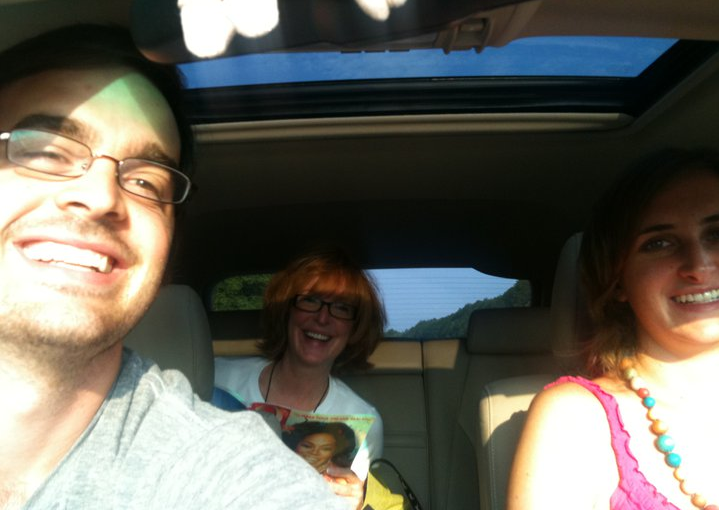 The trip was totally unexpected, but felt in perfect timing. Because we’d released what we knew wasn’t working for us anymore (selling all our things and leaving Dallas), we were able to be in the perfect place to help Libby. It was such a gift to meet her. She was a Methodist missionary to China, the Philipines, and Thailand, and she is very metaphysical. Her bookshelves were lined with books about auras, energy, and other spiritual topics. We had great conversations, heard fascinating and funny stories from her, and I felt connected and part of a beautiful family.

I was also able to meet Mark’s cousin, Liana, who is such a special, beautiful soul. I instantly connected with her, and I cried with gratitude a few days later when we were ready to leave. She reminded me about trusting the Universe and that when you follow your heart, everything works out. I will tell you that story in another post.

All this time I was feeling that once we were finished helping Libby, my passport would arrive. I had to finish the step I was on before things would work out for the next step in our journey. I continued to check my passport application status online, and I even wrote to an email address they listed to ask them to look again at my paperwork. The next day I received an email from them – due to website issues, they were unable to answer email at this time. Ugg!!! Okay, I’d been patient and understanding and in-the-flow for several weeks, but now I was feeling very frustrated. No matter what I knew about perfect timing, it all started to sound like “blah blah whatever” in my head. I was done. Then, Mark asked me to call the passport office again, and I just broke down crying. I told him it was pointless to call them, pointless to write, and pointless to email. I had no energy to contact them again, and I was beyond done with the whole process. At that moment, all I cared about was not ever having to deal with them again. If I never received my passport, oh well.

Two days passed, and I received a call from my mom. My passport had arrived in the mail! Hallelujah! She mailed it to Florida the next week.

The whole point of expediting the passport was because we were ready to head out of the country and explore. However, by the time we received it, neither Mark nor I had a strong sense about where to go first. Gradually, we decided we wanted to explore the northwest United States some more. We have a very different mindset about our trip than we did several weeks ago, and we are now thankful for the passport delay.

This whole experience reminded me of something else as well. I may have a plan of how everything is going to work out, but the Universe may have other ideas and take over. Ultimately, it’s all for my highest good and helps me accomplish my true heart’s desire. Maybe my higher self, knowing I really wanted a different travelling experience, struck the passport office workers with Divine Incompetence that day so I could have time to come to new realizations about what I really want.

This Sunday, we’re flying into Portland. If that’s your neck-of-the-woods, drop me a line!

Lots of love to you,

Adventure vs. Stability: Finding the Balance
Free Tarot Reading: Pick a Card to Get a Message!
Is it a sign or your imagination?