This is the story of a woman (me a year ago) overcoming her fear.  One day, this woman and her fiancé were taking a long walk when they happened upon a creek with a pipe stretched across it.  Her fiancé was thrilled and couldn’t wait to cross the pipe.  The woman watched on the side, fearing for his life, while she thought of the possibility of his falling several feet on his tuckus to the shallow, rocky creek below.  She was already figuring a plan of action in her mind for calling the ambulance and describing their whereabouts (where were they?) in case he broke his leg or suffered other serious injury.  (Note: it is not healthy to dream up horrible scenarios like this woman did!)  Meanwhile, she watched with 1% glee and 99% horror as the love of her life RAN back and forth across the pipe.  RAN, people!!!  What was he thinking??!!!…..ahem…..the….uh…woman asked herself.

After several death-defying runs, the woman wondered if what she thought was a quick trip to certain death might actually be a fun and reasonably harmless thing to do (provided one was very careful and didn’t run for Goodness sake!).  She remembered when she was a child and didn’t think twice before doing things she would now find scary.  Like walking alone at night or getting on a really high bar and swinging upside down before letting go with a wild, happy laugh.  Climbing on anything and everything or running barefoot down the street (she didn’t even think about stepping on a nail or whether her tetanus shot was current).  Those were joyful memories of her childhood.  She was so brave then!  She didn’t know any of the worst-case-scenarios she now has filed away in her brain.

That part of her began waking up again, slowly.  The woman thought about some of the things she’d seen and done as an adult that could be considered scary, but she’d survived and thrived through them.

A little wellspring of light began growing within her.  I can do this, she thought.  Maybe it’s not so scary after all, and either way, I don’t want to be so scared of the worst happening that I miss out on the adventure of living.

So, with the encouragement of her wonderful love and inspirational adventurer, she started out.  Step after slow and careful step, she made her way across. 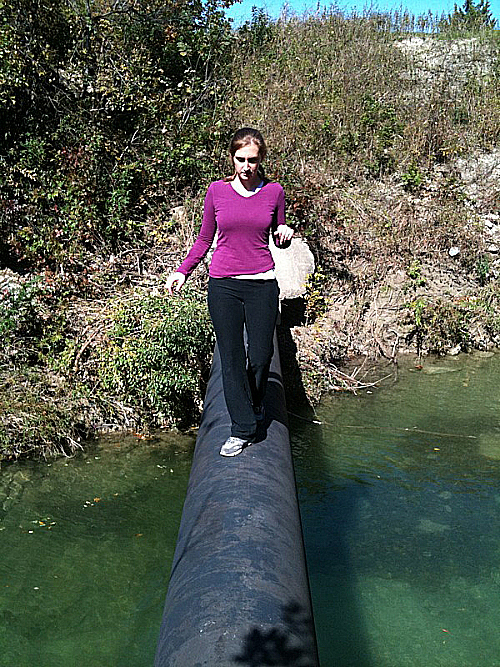 Before she knew it, she was halfway there!  And it wasn’t so bad after all.  Maybe once she arrived on the other side of the creek, she might even look back on this event and feel like it was kinda joyful…and maybe even fun! 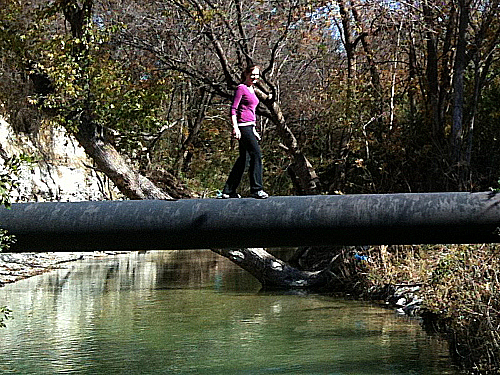 Look!  She’s doing it!  And she’s not even scooching herself along on her stomach, like she had first considered doing 🙂 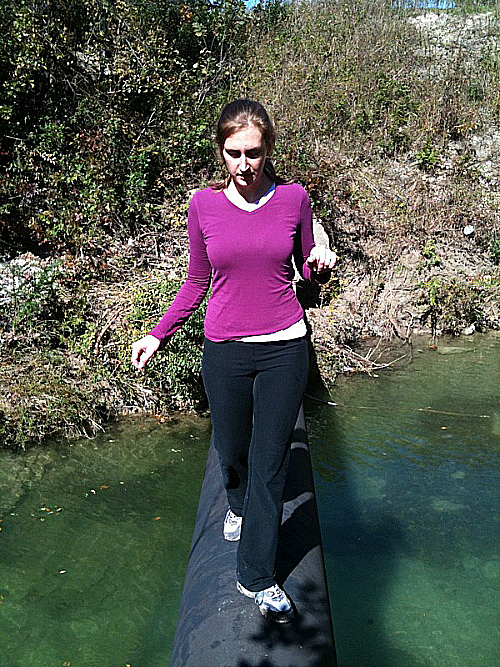 The home stretch took her full concentration, but she did it!! 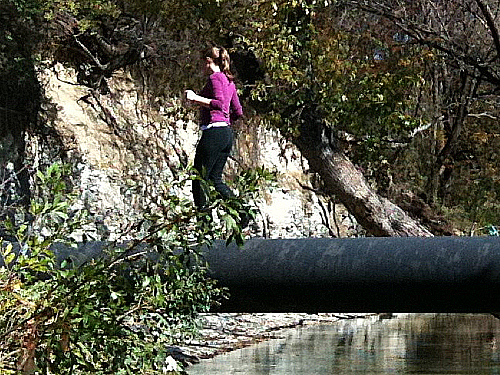 The heroine of our story survived!  And you know what?  Facing her fears and crossing the pipe made her feel exhilarated and FULL of joy!  She was so proud of herself!  It made her feel like other things she would like to do in her life but had been fearful of may not be so scary after all.  In fact, everything in life looked easier.

So many times in life, the things that feel scary (like letting go of what you know to venture in a totally new direction) are just unfamiliar.  They feel scary or awkward because they haven’t become a habit yet.  And sometimes, even little victories, like crossing a pipe, can make way for amazing changes and life reinventions.

Here’s hoping you have many exciting, fun adventures in this wonderful new year.  It’s full of possibilities and opportunities just for you!