I was talking to a good friend of mine last week, and he was feeling pretty down.  He’d just found out that the business he works for will be going through a transition, and in about two years, the job he does now will be nonexistent.  I immediately saw this as a great opportunity for him, not a problem, but sometimes I have to hold my tongue until he opens up to seeing it that way too.  So, instead of immediately celebrating, I said, “Do you even want to be doing the same job you’re doing now in two years?”

I knew he didn’t.  He’s been wanting to do something different for many years now.  Even if I didn’t already know that, the fact that the job wouldn’t be available in the future tells me his Spirit wants something different, so he’s already creating a new experience for himself.  Nothing happens to us, it happens for us.  We are not victims, we are amazing creators creating great experiences for ourselves.  Everything that happens works for our favor in one way or another.

Then I said, “You have been wanting a different job for years.  It sounds like this is a great opportunity to help you move on because now you have a deadline.”  It’s a cushy deadline too.  One that will give him enough time to figure everything out if he chooses to. 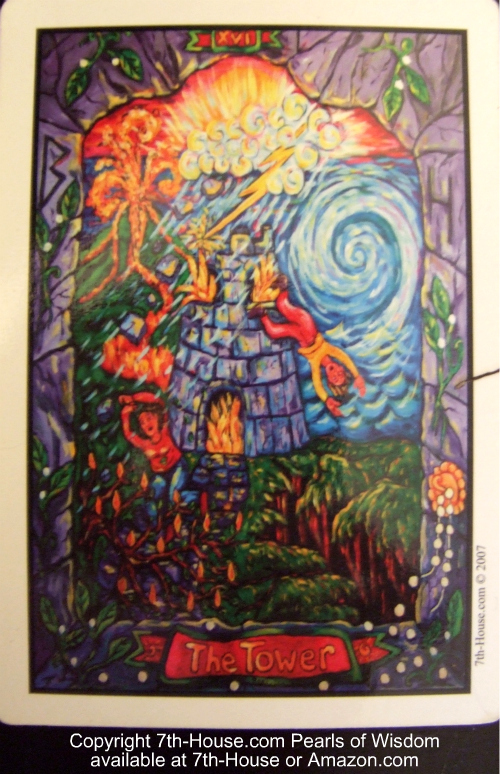 This kind of situation would often show up for me as the Tower card in a reading. The Tower card is sometimes thought of as a “bad” card, but I don’t see any tarot cards as bad, and I see this one as very freeing.  It usually shows up when someone has put off doing what they know they should do (like quit a job and move on), and then they eventually have to be shoved out of that position by the Universe (get laid off, fired, the company goes out of business, etc).  This happened to me when I got laid off many years ago.  If you’re going through this experience right now or feel like a victim to the economy, check out my post, Economic Opportunities.

This happened to a family member of mine as well recently.  She was working for the same company for a few years while she figured out what her dream job is, and things kept getting worse and worse there.  She wanted to quit, but she wanted to know what was next first, so she was hanging on.  Every week she told me, “I need to quit that place,” and every week she would hang on.  She wanted all the details first, she wanted the plan for how everything was going to work out.  Ahem, the Universe doesn’t work that way sometimes.  Sometimes it says, “No, you let go first.”  Well, in this woman’s case, things went from bad to worse.  I did a reading for her and saw the Tower card.  I knew she was about to be “forced” out of there.  Sure enough, the company went under a few months later.  We joked about how she held on so tightly that the entire company had to go under in order to get her to leave 🙂

She was relieved to leave.  Then, she started freaking out, wondering what she was going to do.  She didn’t want to do the same kind of job again.  She wanted something new but had no idea what that “something” was.  I told her that if she wanted something new, just stop applying for the jobs that she used to do before.  She also wrote to people she knew and said she was looking for something different, asking them for suggestions.  She found peace with the process.  She told the Universe that she was going to apply for all kinds of jobs, and asked that the ones that wouldn’t be ideal for her would just not materialize. Then, she found and applied for a job she’d secretly wanted to do for many years but didn’t feel she was qualified for and didn’t know how to get qualified.  She was hired, she loves it, and it is her dream job. It utilizes all her talents, she feels fulfilled, she is appreciated by her co-workers, and after only a few months there, they now use her paperwork and techniques to train new employees!

There are no problems, only opportunities. On some level, we create the experiences in our lives to move us along a path that gets us to where we want to be.  It doesn’t matter if it is a change in career, a changed relationship, or even a health issue.  Everything has a positive reason for being and helps us have the life we want.

Where in your life are you viewing a situation as a problem?  How does that situation actually make it easier for you to have the life you really want?  When you start seeing beyond the illusion of problems and viewing them as opportunities, changes in life are much easier and more peaceful to navigate.

Reading Update: Celebrating Caroline's New Home!
How to Quit Your Job
Free Reading: What is missing in your life?