We have been having the craziest weather in Texas!! 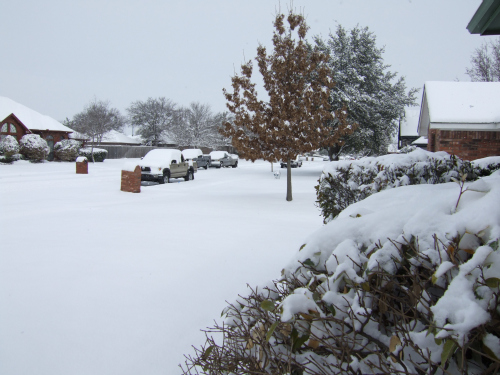 We had two days of icy roads, and then we got 5 inches of snow!  That may not seem like a big deal in other parts of the country, but we are not well-equipped for this kind of weather, so all the businesses were shut and everyone had snow days!

The Dallas area had rolling power outages, so we only had power for about 10 minutes every hour on Wednesday.  Our internet became completely fried by the outages, so we haven’t had internet for several days either!  The same day the internet went out, a pipe burst in my mom’s kitchen, and we walked in to several inches of water on the kitchen floor and the sound of more water gushing out!  It was a crazy day!  When I went in the kitchen, I saw a postcard floating in the middle of the floor.  I guess it had fallen under one of the appliances a long time ago.  It was sent from my family in England, and it was floating message-side-up.  The message read, “We love you! xoxo”  When I saw that, it didn’t matter that the water was still gushing because I knew this was really a blessing and that everything would work out just fine.

We called the water department to shut off the main water valve to the house.  Then, Mark and I ran outside to dig out the water and mud that had accumulated over the valve.  We finished right as the men from the water department arrived.  They were so friendly!  We had a lot of fun and were both in isn’t-this-an-exciting-adventure mode 🙂

Then, the restoration people arrived to clean up the water, which by that time had soaked into the dining room and living room carpets.  They were super friendly too!  The roads were so bad, I’m surprised we were able to get anyone to come to help that day.  The plumber wasn’t able to come until the following morning, so we went the rest of the day and night without any running water.  It was quite an experience!  It was so funny when the restoration men arrived and one of them asked to use the restroom.  I laughed and showed him to the backyard!  Ha! 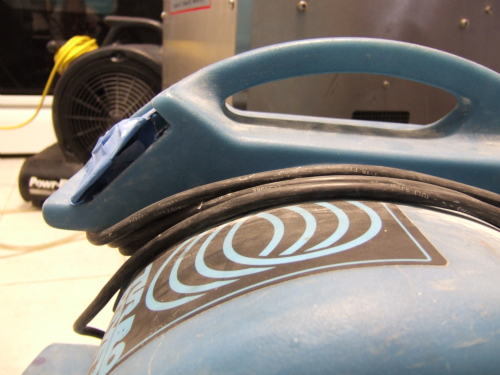 My mom’s home has been overtaken by fans in each room.  They are very noisy guests, and Midnight (my mom’s cat) doesn’t care for them at all, but Cosmo is proving to be a super brave kitty and feels free to venture all over the house.

The next morning, the plumber and insurance adjuster arrived.  They were both so friendly, and the plumber was hilarious!  We were amazed to see that all the water had come from a measly 1/2 inch split in the pipe.

My mom felt so blessed that Mark and I were at her home when it all happened.  She had been working from home at the back of the house at the time, and she would not have heard or noticed the burst pipe until it had already flooded the entire house.  She was also able to continue her work for the past several days while Mark and I handled the clean up.  Best of all, the insurance company is paying for her to remodel her kitchen and get new flooring in most of the house, something she had wanted to get done for a long time anyway!  What a blessing!

Several days without internet had its benefits as well.  I felt like it happened for a positive reason (as I believe everything does), so I took advantage of the time.  Mark and I started creating a Valentine’s Village together the first day (before the water leak), and the other days we spent time reading, writing, and playing games as a family.  I also wrote several more pages for my tarot book and was able to study and take notes on two of the books I’m reading at the moment.

Best of all, Mark and I took time to have fun playing in the snow!  We hardly ever get snow in Texas, and when we do, it doesn’t last very long.  We took full advantage of it!  Mark grabbed the inflatable alligator pool float from the back shed, we donned our makeshift snow gear (I wore my mom’s garden wellies and thick garden gloves – my gloves are too puny for really cold weather), and pushed each other up and down the snowy street on the alligator.  It was hilarious and so much fun!  We both laughed so hard and felt like little kids playing in the snow! 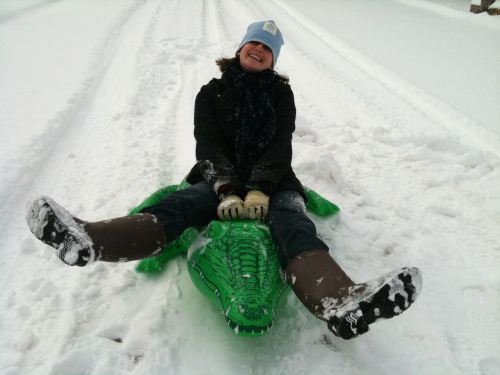 Wherever you are, I hope you are warm, safe, and happy!

Meditation: Beach Relaxation
Free Reading: How Soon Will it Happen?
The Myth of Getting It All Done