There are tree people.  Did you know that?  Faces in the trees.  I guess tree “people” isn’t accurate, because they are trees, not people.  I guess tree Spirits is more accurate.  Mark and I saw them while we were in Ireland.  Ireland is so lush.  You can drive for miles upon miles just seeing the occasional small village dotted here and there.  We would be walking or driving, and suddenly I’d see a face in the tree, clear as day.  Not a fleshy, human face.  It was part of the tree.  It was like a clear face on the trunk of the tree.  Some even had beards.  Not hairy ones, but clear ones that were part of the tree.  Imagine drawing a white outline of a face and facial features on a sheet of transparency film.  Then hold the transparency up to the tree bark.  You’d see the bark, but also the face.  I saw several while in Ireland, and I kept it to myself, feeling the quiet wonder and questioning of a new discovery.  At first, I didn’t know if I was really seeing what I saw.  But I saw several!  And maybe I can wonder when I’ve only seen one, but once I’ve seen several, it’s time to stop wondering and start believing.    Then one day we were driving and Mark told me he had seen several faces in the trees!  I was so excited!  “Really?!  Me TOO!” I exclaimed.

You don’t have to wait until you go to Ireland to see tree people.  I saw some while I was in Florida too.  And you know what I think makes a difference?  Being in the moment.  Taking time in nature to just enjoy it.  Looking at nature with wonder and openness.  What a great feeling that is 🙂  You don’t have to try to see them and talk with them, you just allow it.  Be open.

I’ll take you along on a little trip to see a really cool tree we found in Ireland.  It isn’t one that I saw a face in – I didn’t take pictures of those trees because I thought it would be rude.  What if someone just stopped on the streets and started taking pictures of you?

So here we go!  We’re going to Glendalough, Ireland, which is a place we highly recommend.  It’s gorgeous there and a popular destination for walkers.  We were walking back to our B&B from our fav restaurant in Ireland (The Wicklow Heather), and I suddenly caught a glimpse of stone to our left.  Peering through the lush greenery that lines almost every road in Ireland, I saw an old ruin!  Mark and I decided to go on an adventure to go see it.  We saw a little sign: 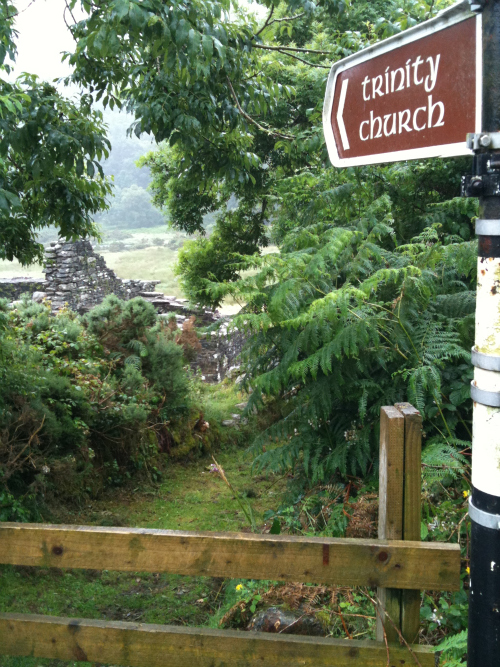 We climbed over the fence, walked down the mossy path covered in little rain drops (when you go to Ireland, wear waterproof shoes!), climbed up some old stone steps to get over an old stone wall, and voila! 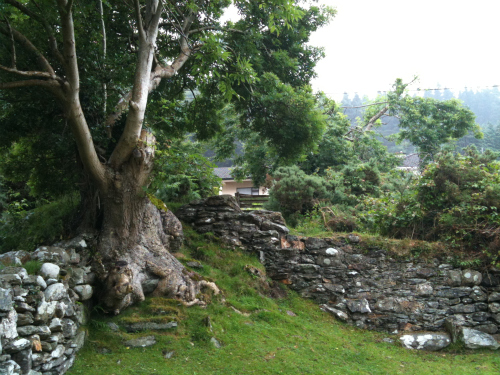 Here’s the view from inside the little church yard area.  Look near the house and you can see the wooden fence that was by the sign for Trinity Church.  Isn’t that a beautiful tree?   This tree stood about 10 yards from the church.  The entrance to the yard is just behind the tree.  There are about six steep stone steps leading over the wall.  You can see some of the steps down near the base of the tree. 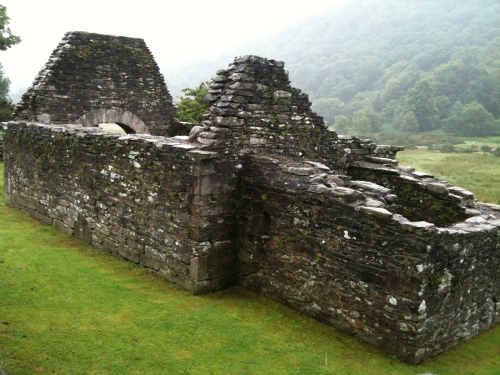 Here’s Trinity Church!  Glendalough has many ruins, and they make sure the grounds are cared for around them for easier access.  I prefer walking through overgrown weeds and vines myself 🙂  It adds to the authenticity for me.  See the base of the evergreen-covered mountain in the distance?  It was very misty that day.  Misty and cold.  It was perfect Irish weather, and we loved it!

Thank you for joining me on my trip back to Ireland.  I have such wonderful memories there with my honey.

While I hadn’t seen faces in trees before going to Ireland, I have spoken to trees for several years.  I think this started one day when I was on a swing set in the park.  I was on a break from my classes in college, so I went to the park to enjoy the beautiful day.  Several feet from the swing set was a very beautiful tree.  I could feel its happiness radiating as I enjoyed my swing ride.  It really liked its spot near the swings and sandbox, and it regularly witnessed children laughing and playing.  I had a nice time feeling the energy of the tree and talking with it.  I asked if I could take a picture of it, but it was rather shy and didn’t want its picture taken.  That was okay by me.

When Mark and I were in our early stages of dating, we would walk the labyrinth late at night at the church where we met and talk about life and our philosophies.  One time I was so giddy because I could feel that the trees were so happy to have us there.  I told Mark.  He was the first person I’d spoken about trees to.  I told him I sometimes talk to trees and that they sometimes talk back.  He said his mother is the same way!  She is very connected to trees, and she has chosen the different houses they’ve lived in based on what the trees told her on the property.  Recently, she went to look at a new home in Florida, and she asked the tree, “Are you going to be my tree?”  Then something on the tree caught her eye.  It was a heart with the word Hi carved in the center.  Isn’t that cool?!

So many magical things, events, and Spirits in the world, whenever we allow ourselves to see them.

Walking Meditation Through Guanajuato, Mexico
Free Reading: What is missing in your life?
Free Reading: Message from Loved One Who Has Passed