It was a typical, sweltering, 100-degree summer day in Texas. Mark and I were enjoying our car’s icy air conditioning while running errands to prepare for our next adventure (to be revealed in the coming weeks). We were on our way to get a copy of our marriage certificate when we came upon a young man trying to push his car down the street. It was a busy, 6-lane street, and he was in the turn lane with the obvious intent of pushing his car across the other three lanes of traffic into the shopping center.

We pulled up behind him, grateful he was in the relative safety of the turn lane. Just as we got out of our car, there was an opening in the traffic, so we ran up to the man’s car and helped him push it across the lanes and into the parking lot. We made it safely to the other side, wiped the sweat from our foreheads, and found out that the car had run out of gas. I said, “Well thank goodness it’s an easy fix and not a big, expensive problem with your engine!” He agreed. 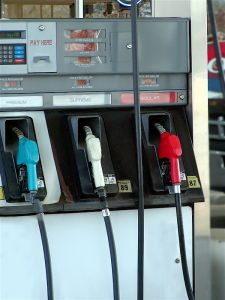 The man’s wife, who had been steering the car, got out of the car, followed by her 4 year old daughter.  They both looked tired and hot, and were so thankful for our help. I mentioned what great luck it was that they broke down right at a gas station, which was about 40 feet away. The wife told us they couldn’t use it because they had a gas card, but it didn’t work at that gas station. From what the woman was saying, as well as looking at their car and clothing, it appeared that they were really having to watch their money. I thought about offering to drive them to the type of gas station they had a card for, but we’d just come back from storage and our car was packed with boxes. Luckily, I had some extra cash in my purse, so I whispered to Mark to get it from our car. While he was gone, I asked the man if his car had broken down in the turn lane. “No, the car stopped halfway down the street,” he said, pointing to the end of the block. “When I got to the turn lane, I stopped. I just couldn’t go another step further.”

After returning to our car, the tears started falling. I felt connected to those people, and I felt connected with the part of myself at different times in my life that had also needed help and hoped for a miracle. We are all connected energetically, and as I helped them, I realized I was also helping the part of myself that they represented. At different times in my life, there have been moments when I’ve been the one who needed help and couldn’t go one step further. Always, without exception, I have received the help and answers I needed just when I most needed it. As I watched the family walk to the gas station, cash in hand, I felt in my soul that we are all watched over, loved, and provided for. As Mark and I were running errands to prepare for our next adventure, that was the blessing of reassurance I needed.

It also reminded me of a Joel Osteen sermon I watched on YouTube a few weeks ago called, You Are Somebody’s Miracle. It was a great reminder that every day we can look out for ways to help the people around us. There are so many opportunities to be somebody’s miracle that are so easy for us. In our case, it was so easy for us to help this family push their car across the street and give them a few dollars for gas. It only took 15 minutes of our time and blessed us with wonderful spiritual blessings that we needed as well. To that family and to the man who couldn’t go one step further on his own, we were their miracle. It’s easy to be somebody’s miracle. It can be as simple as offering an umbrella in a rainstorm, making time to talk to a friend you  know needs some encouragement, or giving someone a few dollars for gas. We have the ability to make someone’s day. And when you make someone else’s day, it will probably make your day as well!

How can you be somebody’s miracle today?

Adventure vs. Stability: Finding the Balance
Free Reading: What is your spirit trying to tell you?
Yesterday I Ran to Face My Fear